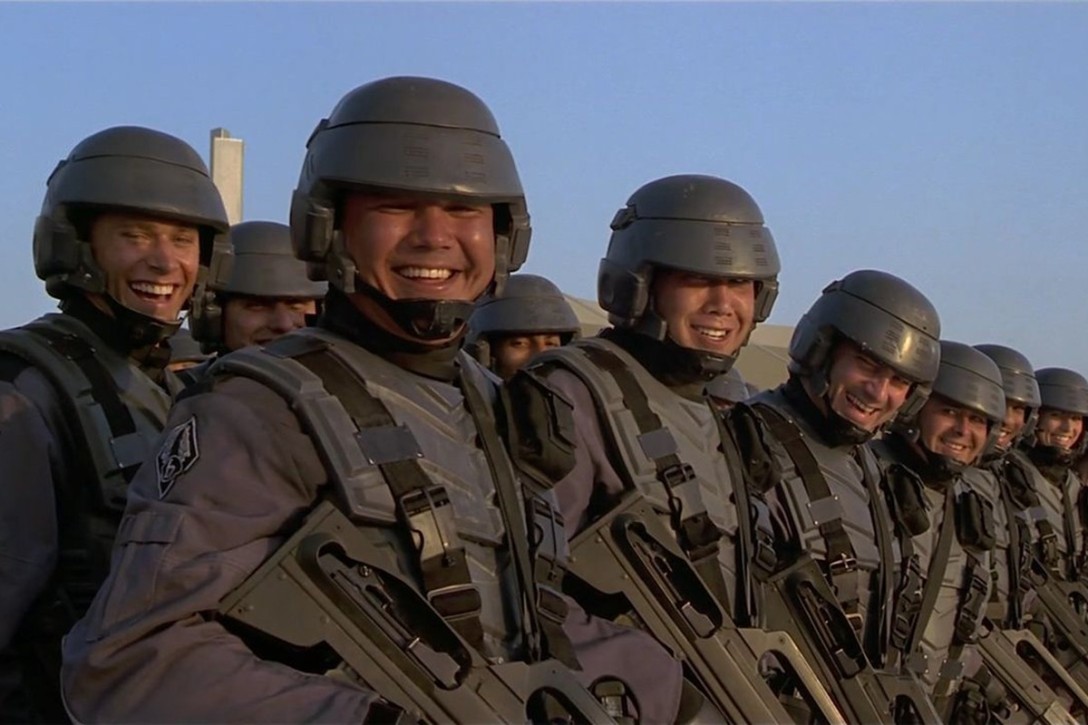 As a young, impressionable five-year-old boy, I adored Paul Verehoeven’s Starship Troopers (1997) — and, looking back, it’s not hard to see why. A young man fresh out of high school, determined to keep the affection of his outlandishly gorgeous girfriend, joins the space army; where he quickly learns to kill giant bugs, discovers true love, and fully internalises the inner illogic of the fascist republic to which he belongs. I wasn’t the only one mesmerised by this tale. A whole generation of young men were raised on what was effectively a propaganda film for a totalitarian dictatoship that doesn’t exist. Under everyone’s noses, Verhoeven was able to craft what is perhaps the most sophistictaed political satire of the past forty years; a satire so brazenly clever that even renowned film critic Roger Ebert was unable to detect its true voice.

Here’s the big picture: a couple of hundred years from now, Earth is ruled by the United Citizen Federation; a xenephobic, militarisitc, jingoistic state that seperates individuals into two distinct categories: citizens and civilians. Citizenship in this world, much unlike our own, is not granted as a birthright; it requires serving the nation and personally taking responsability for its survival. The film presents military service as the sole route to achieving the first-class status — be it as a member of the mobile infantry, the navy fleet, or military intelligence. The difference between citizen and civilian has far reaching societal consequences: those without citizenship cannot vote, face resistance when applying for licenses to have children, and are generally withheld rights and opportunities that many of us living in liberal democracies take for granted.

The inner workings of this fascist state are cleverly infused with the plot. Rico (Casper Van Dien) is a rich boy whose family wealth sets him up for an easy life. Although he, if he follows his parents, will be largely excluded from participation in the public political culture, he will mantain the financial and educational opportunities that makes this exclusion almost completely bearable. Rico, therefore, has no material reason to become a citizen. Despite this, he hungers to become a one — largely because of the social prestige and respect that comes with elevating oneself to the top strata of society.

At school, a teacher named Mr. Ratcheck (Michael Ironside) spells out the core philosophy at the foundation of this nation: that “violence is the supreme authority from which all others derive”; that the perpetrators of democracy “brought our world to the brink of chaos”; and that “naked force has reolved more issues throughout history than any other factor”. He presents that there is not just a legal but moral difference between a citizen and a civilian, as the former sacrifices themselves for the survival of the “body politic” — a Platonic term that rests on the idea that members of a community both comprise and belong to one harmonius societal whole not unlike a person. He insists that, while the students may have revised these words, they are unlikely to understand what they well and truly mean. This class, as the film unashamadly demonstrates, is a place for indoctrination — a place where people like Rico, who have no material reason to sacrifice themselves for the betterment of the state, are convinced that they should do for nobler reasons. Rico, joined by his girlfriend Carmen (Denise Richards) and friends Carl (Neil Patrick Harris) and Dizz (Dina Meyer), enlist for service.

Verheoven’s greatest achievement was to tweak certain aspects of the film’s presentation in such a way that the fascism gets lost when you’re not looking for it. The grossest and yet most ingenious of these was using a species of giant, intelligent bugs as the other to which all of humanity bands together to exterminate. This is significant primarily because the fascism both you and I are accustomed to through history books is neccesarily anthroprocentric. The Nazi’s targeted jews, gypsies, slavic peoples, and anyone else non-Aryan as their object for scorn, hatred and extermination — and, so long as we remain alone in our intelligence and dominance, it is wise to assume that future fascist regimes, whatever shape they take, will always target another human minority. Verheoven flips the table, however, by making the subject of fascist hatred a creature that all of us are primed to find repulsive — thus encouraging us to buy into the repugnant and dehumanising attitudes that we would otherwise find intolerable.

This feeds into Verheoven’s choice to make ethnic and gender diversity a key component of this fascist future, albeit less so then Heinlen’s book. By refocusing all the xenophobia to another species, previously anti-fascist stances, such as encouraging racial diversity and equality of the sexes, suddenly become compatible with fascist politics. This is deeply counter-intuitive but, when you follow its logic, makes perfect sense. Like all political ideologies, fascism evolves with the times — but unlike liberalism, conservatism or marxism, fascism is uniquely irrationalistic. It’s defined less so by an adherence to principles but, in a twisted form of conversatism, relies entirely on unmitigated expressions of hatred, collective delusions, and the violent disdain of individualism. What shape fascist cultures take is, ultimately, a reaction to circumstances. No two fascisms will ever look the same.

This is why Starship Troopers can be difficult at times. Society is stable, the people are happy and beautiful, and, strangely, some minute level of dissent is tolerated amongst the non-voting civilian population. I suppose this is because we’re witnessing a fascist state that has survived longer than any we have seen in our world thus far. And what if, as Verheoeven imagines, these regimes succeeded on a global scale? After perhaps a century or two of dominance, any real and substantial resistance would wither away into the history books. Democracy would be considered, as it was in Ratcheck’s classroom, a failed experiment that we thankfully escaped. No one would remember what it was like to not be a fascist.

Starship Troopers faced backlash upon its release for presenting its signature fascism in an entirely uncritical light. It is precisely this unmitigated presentation of fascist politics, however, that allows Verheoven to lay naked the utter emptiness of what such a future would look like — both for individual people and humanity as a whole. Upon entering service, each of the young, optimistic high school graduates we follow becomes enmeshed in a hateful campaign of eradication that rots at their very humanity. Our heroes are scarred, brutalised and forced to watch those they love die in front of their eyes. And as they are so insidiously reduced into nothing expect unfeeling, violent vessels of pain and suffering, they begin to well and truly understand what it means to sacrifice oneself for the survival of the state. They fully relinquish all their selfish hopes and heartfelt dreams. Their lives become interchangable, their value determined solely by their utility to the Federation.

What Verheoven shows, at bottom, is that fascism turns living, feeling individuals into non-persons; people who live only for the destruction of something else. Cruelty becomes the highest virtue. Love becomes impossible. Those who live to return home come back empty and settled in their hates. United in their self-eradication, they vote collectively to perpetuate the way of life that destroyed them; a way of life that requires something to hate because, beneath all the window dressing, there is nothing else holding it all together. Fearful, paranoid and suspicious of anything that is whole and just and good, citizens give themselves to the worst in each other. Any semblance of genuine humanity is lost in the endless nationalistic bloodlust.

When, at the end of the film, they capture one of the brain-bugs behind the arachnid war effort, Carl, now a key member of Federation military intelligence, uses his telepathy to discover, in a horrific twist of empathy, that the creature is afraid. The soldiers surrounding the creature erupt into a joyous frenzy, celebrating their ability to inspire fear in their enemy. It is in this moment that the satire reaches it’s height. What should be a moment of utter terror and guilt is magnificently presented as a triumpth; a victory for humanity. And, as I sat there watching in disgust, a flurry of thoughts rushed through my mind. I thought, at first, about all the critics who failed to see the point of this scene. And, at the same time, I thought about how perfectly it exemplifies the rot that these people share. All of these thoughts, however, dissappeared when I remembered, in a quiet mixture of clarity and shame, all of those lazy childhood weekends when, with fervour and pride, I stood and cheered with them.